Candidate A is contesting an election. A polling organization wants to estimate the proportion of voters who will vote for her. Let’s suppose that they plan to take a simple random sample of voters, though in reality their method of sampling would be more complex. How can they decide how large their sample should be, to get a desired level of accuracy?

We are now in a position to answer this question, after making a few assumptions:

If we had a random sample, we could go about using the bootstrap to construct a confidence interval for the percent of voters for Candidate A. But we don’t have a sample yet – we are trying to find out how big the sample has to be so that our confidence interval is as narrow as we want it to be.

In situations like this, it helps to see what theory predicts.

So the confidence interval will still be the “middle 95%” of a normal distribution, even though we can’t pick off the ends as the 2.5th and 97.5th percentiles of bootstrapped proportions.

Is there another way to find how wide the interval would be? Yes, because we know that for normally distributed variables, the interval “center $\pm$ 2 SDs” contains 95% of the data.

We are willing to tolerate a width of 1% = 0.01. So, using the formula developed in the last section,

So are we stuck? No, because we can bound the SD of the population. Here are histograms of two such distributions, one for an equal proportion of 1’s and 0’s, and one with 90% 1’s and 10% 0’s. Which one has the bigger SD?

Remember that the possible values in the population are only 0 and 1.

In the gold histogram, all of the area is being squished up around 1, leading to less spread. 90% of the deviations are small: 0.1. The other 10% are -0.9 which is large, but overall the spread is smaller than in the blue histogram.

The same observation would hold if we varied the proportion of 1’s or let the proportion of 0’s be larger than the proportion of 1’s. Let’s check this by calculating the SDs of populations of 10 elements that only consist of 0’s and 1’s, in varying proportions. The function np.ones is useful for this. It takes a positive integer as its argument and returns an array consisting of that many 1’s. 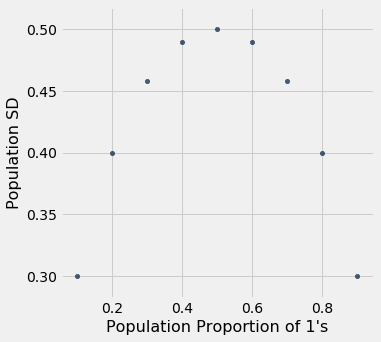 We know that and that the SD of the 0-1 population is at most 0.5, regardless of the proportion of 1’s in the population. So it is safe to take

So the sample size should be at least $200^2 = 40,000$. That’s an enormous sample! But that’s what you need if you want to guarantee great accuracy with high confidence no matter what the population looks like.