In this course, we have used the words “average” and “mean” interchangeably, and will continue to do so. The definition of the mean will be familiar to you from your high school days or even earlier.

The methods np.average and np.mean return the mean of an array.

The definition and the example above point to some properties of the mean.

We will now study some other properties that are helpful in understanding the mean and its relation to other statistics.

The Mean is a “Smoother”

You can think of taking the mean as an “equalizing” or “smoothing” operation. For example, imagine the entries in not_symmetric above as the dollars in the pockets of four different people. To get the mean, you first put all of the money into one big pot and then divide it evenly among the four people. They had started out with different amounts of money in their pockets ($2, \$3, \$3, and \$9), but now each person has \$4.25, the mean amount.

You can replace 1 by the Boolean True and 0 by False:

The Mean and the Histogram

To see this, notice that the mean can be calculated in different ways.

For example, here is another collection that has the same distribution as not_symmetric and hence the same mean.

The mean is the center of gravity or balance point of the histogram.

To understand why that is, it helps to know some physics. The center of gravity is calculated exactly as we calculated the mean, by using the distinct values weighted by their proportions.

Because the mean is a balance point, it is sometimes displayed as a fulcrum or triangle at the base of the histogram.

The Mean and the Median

If a student’s score on a test is below average, does that imply that the student is in the bottom half of the class on that test?

Happily for the student, the answer is, “Not necessarily.” The reason has to do with the relation between the average, which is the balance point of the histogram, and the median, which is the “half-way point” of the data.

The relationship is easy to see in a simple example. Here is a histogram of the collection {2, 3, 3, 4} which is in the array symmetric. The distribution is symmetric about 3. The mean and the median are both equal to 3.

In general, for symmetric distributions, the mean and the median are equal.

What if the distribution is not symmetric? Let’s compare symmetric and not_symmetric.

The blue histogram represents the original symmetric distribution. The gold histogram of not_symmetric starts out the same as the blue at the left end, but its rightmost bar has slid over to the value 9. The brown part is where the two histograms overlap.

But the mean of the gold distribution is not 3: the gold histogram would not balance at 3. The balance point has shifted to the right, to 4.25.

In the gold distribution, 3 out of 4 entries (75%) are below average. The student with a below average score can therefore take heart. He or she might be in the majority of the class.

In general, if the histogram has a tail on one side (the formal term is “skewed”), then the mean is pulled away from the median in the direction of the tail.

The table sf2015 contains salary and benefits data for San Francisco City employees in 2015. As before, we will restrict our analysis to those who had the equivalent of at least half-time employment for the year.

As we saw earlier, the highest compensation was above \$600,000 but the vast majority of employees had compensations below \$300,000. 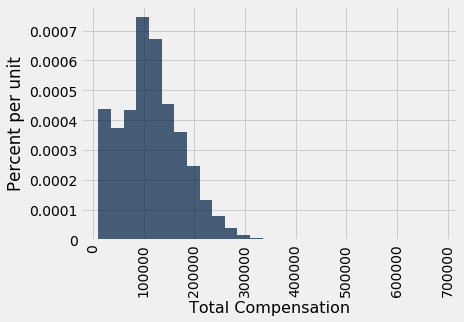 This histogram is skewed to the right; it has a right-hand tail.

The mean gets pulled away from the median in the direction of the tail. So we expect the mean compensation to be larger than the median, and that is indeed the case.

Distributions of incomes of large populations tend to be right skewed. When the bulk of a population has middle to low incomes, but a very small proportion has very high incomes, the histogram has a long, thin tail to the right.

The mean income is affected by this tail: the farther the tail stretches to the right, the larger the mean becomes. But the median is not affected by values at the extremes of the distribution. That is why economists often summarize income distributions by the median instead of the mean.