On January 18, 2015, the Indianapolis Colts and the New England Patriots played the American Football Conference (AFC) championship game to determine which of those teams would play in the Super Bowl. After the game, there were allegations that the Patriots’ footballs had not been inflated as much as the regulations required; they were softer. This could be an advantage, as softer balls might be easier to catch.

For several weeks, the world of American football was consumed by accusations, denials, theories, and suspicions: the press labeled the topic Deflategate, after the Watergate political scandal of the 1970’s. The National Football League (NFL) commissioned an independent analysis. In this example, we will perform our own analysis of the data.

Pressure is often measured in pounds per square inch (psi). NFL rules stipulate that game balls must be inflated to have pressures in the range 12.5 psi and 13.5 psi. Each team plays with 12 balls. Teams have the responsibility of maintaining the pressure in their own footballs, but game officials inspect the balls. Before the start of the AFC game, all the Patriots’ balls were at about 12.5 psi. Most of the Colts’ balls were at about 13.0 psi. However, these pre-game data were not recorded.

During the second quarter, the Colts intercepted a Patriots ball. On the sidelines, they measured the pressure of the ball and determined that it was below the 12.5 psi threshold. Promptly, they informed officials.

At half-time, all the game balls were collected for inspection. Two officials, Clete Blakeman and Dyrol Prioleau, measured the pressure in each of the balls.

Here are the data. Each row corresponds to one football. Pressure is measured in psi. The Patriots ball that had been intercepted by the Colts was not inspected at half-time. Nor were most of the Colts’ balls – the officials simply ran out of time and had to relinquish the balls for the start of second half play.

The drop in pressure for each football is the difference between the starting pressure and the combined pressure measurement.

It looks as though the Patriots’ drops were larger than the Colts’. Let’s look at the average drop in each of the two groups. We no longer need the combined scores.

The average drop for the Patriots was about 1.2 psi compared to about 0.47 psi for the Colts.

The question now is why the Patriots’ footballs had a larger drop in pressure, on average, than the Colts footballs. Could it be due to chance?

How does chance come in here? Nothing was being selected at random. But we can make a chance model by hypothesizing that the 11 Patriots’ drops look like a random sample of 11 out of all the 15 drops, with the Colts’ drops being the remaining four. That’s a completely specified chance model under which we can simulate data. So it’s the null hypothesis.

For the alternative, we can take the position that the Patriots’ drops are too large, on average, to resemble a random sample drawn from all the drops.

This positive difference reflects the fact that the average drop in pressure of the Patriots’ balls was greater than that of the Colts.

If the null hypothesis were true, then the Patriots’ drops would be comparable to 11 drops drawn at random without replacement from all 15 drops, and the Colts’ drops would be the remaining four. We can simulate this by randomly permuting all 15 drops and assigning each team the appropriate number of permuted values.

How do all the group averages compare?

The two teams’ average drop values are closer when the balls are randomly assigned to the two teams than they were for the balls actually used in the game.

It’s time for a step that is now familiar. We will do repeated simulations of the test statistic under the null hypothesis, by repeatedly permuting the footballs and assigning random sets to the two teams.

In the last section we defined a function called permuted_sample_average_difference to do this. Here is the definition again. The code is based on the steps we took to compare the averages of the shuffled data.

The array differences contains 10,000 values of the test statistic simulated under the null hypothesis.

To calculate the empirical P-value, it’s important to recall the alternative hypothesis, which is that the Patriots’ drops are too large to be the result of chance variation alone.

The “direction of the alternative” is towards large drops for the Patriots, with correspondingly large values for out test statistic “Patriots’ average - Colts’ average”. So the P-value is the chance (computed under the null hypothesis) of getting a test statistic equal to our observed value of 0.73352272727272805 or larger.

That’s a pretty small P-value. To visualize this, here is the empirical distribution of the test statistic under the null hypothesis, with the observed statistic marked on the horizontal axis. 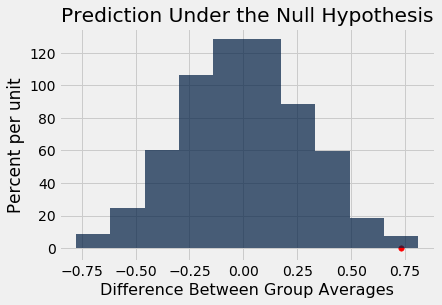 As in previous examples of this test, the bulk of the distribution is centered around 0. Under the null hypothesis, the Patriots’ drops are a random sample of all 15 drops, and therefore so are the Colts’. Therefore the two sets of drops should be about equal on average, and therefore their difference should be around 0.

But the observed value of the test statistic is quite far away from the heart of the distribution. By any reasonable cutoff for what is “small”, the empirical P-value is small. So we end up rejecting the null hypothesis of randomness, and conclude that the Patriots drops were too large to reflect chance variation alone.

The independent investigative team analyzed the data in several different ways, taking into account the laws of physics. The final report said,

– Investigative report commissioned by the NFL regarding the AFC Championship game on January 18, 2015

Our analysis shows an average pressure drop of about 0.73 psi, which is close to the center of the interval “0.45 to 1.02 psi” and therefore consistent with the official analysis.

But the all-important question in the football world was about causation: the question was whether the excess drop of pressure in the Patriots’ footballs was deliberate. If you are curious about the answer given by the investigators, here is the full report.