We have seen several examples of assessing models that involve chance, by comparing observed data to the predictions made by the models. In all of our examples, there has been no doubt about whether the data were consistent with the model’s predictions. The data were either very far away from the predictions, or very close to them.

But outcomes are not always so clear cut. How far is “far”? Exactly what does “close” mean? While these questions don’t have universal answers, there are guidelines and conventions that you can follow. In this section we will describe some of them.

But first let us develop a general framework of decision making, into which all our examples will fit.

The null hypothesis. This is a clearly defined model about chances. It says that the data were generated at random under clearly specified assumptions about the randomness. The word “null” reinforces the idea that if the data look different from what the null hypothesis predicts, the difference is due to nothing but chance.

From a practical perspective, the null hypothesis is a hypothesis under which you can simulate data.

In the example about Mendel’s model for the colors of pea plants, the null hypothesis is that the assumptions of his model are good: each plant has a 75% chance of having purple flowers, independent of all other plants.

Under this hypothesis, we were able to simulate random samples, by using sample_proportions(929, [0.75, 0.25]). We used a sample size of 929 because that’s the number of plants Mendel grew.

The alternative hypothesis. This says that some reason other than chance made the data differ from the predictions of the model in the null hypothesis.

In the example about Mendel’s plants, the alternative hypothesis is simply that his model isn’t good.

In order to decide between the two hypothesis, we must choose a statistic that we can use to make the decision. This is called the test statistic.

In the example of Mendel’s plants, our statistic was the absolute difference between the sample percent and 75% which was predicted by his model.

In the case of the pea plants, a sample percent of around 75% will be consistent with the model, but percents much bigger or much less than 75 will make you think that the model isn’t good. This indicates that the statistic should be the distance between the sample percent and 75, that is, the absolute value of the difference between them. Big values of the distance will make you lean towards the alternative.

Step 3: The Distribution of the Test Statistic, Under the Null Hypothesis

The main computational aspect of a test of hypotheses is figuring out what the values of the test statistic might be if the null hypothesis were true.

The test statistic is simulated based on the assumptions of the model in the null hypothesis. That model involves chance, so the statistic comes out differently when you simulate it multiple times.

By simulating the statistic repeatedly, we get a good sense of its possible values and which ones are more likely than others. In other words, we get a good approximation to the probability distribution of the statistic, as predicted by the model in the null hypothesis.

As with all distributions, it is very useful to visualize this distribution by a histogram. We have done so in all our examples.

Step 4. The Conclusion of the Test

The choice between the null and alternative hypotheses depends on the comparison between what you computed in Steps 2 and 3: the observed value of the test statistic and its distribution as predicted by the null hypothesis.

If the two are consistent with each other, then the observed test statistic is in line with what the null hypothesis predicts. In other words, the test does not point towards the alternative hypothesis; the null hypothesis is better supported by the data. This was the case with the assessment of Mendel’s model.

But if the two are not consistent with each other, as is the case in our example about Alameda County jury panels, then the data do not support the null hypothesis. That is why we concluded that the jury panels were not selected at random. Something other than chance affected their composition.

The Meaning of “Consistent”

But sometimes the decision is not so clear. Whether the observed test statistic is consistent with its predicted distribution under the null hypothesis is a matter of judgment. We recommend that you provide your judgment along with the value of the test statistic and a graph of its predicted distribution under the null. That will allow your reader to make his or her own judgment about whether the two are consistent.

Here is an example where the decision requires judgment.

A Berkeley Statistics class of about 350 students was divided into 12 discussion sections led by Graduate Student Instructors (GSIs). After the midterm, students in Section 3 noticed that their scores were on average lower than the rest of the class.

In such situations, students tend to grumble about the section’s GSI. Surely, they feel, there must have been something wrong with the GSI’s teaching. Or else why would their section have done worse than others?

The GSI, typically more experienced about statistical variation, often has a different perspective: if you simply draw a section of students at random from the whole class, their average score could resemble the score that the students are unhappy about, just by chance.

The GSI’s position is a clearly stated chance model. We can simulate data under this model. Let’s test it out.

Alternative Hypothesis. No, it’s too low.

A natural statistic here is the average of the scores. Low values of the average will make us lean towards the alternative.

Let’s take a look at the data.

The table scores contains the section number and midterm score for each student in the class. The midterm scores were integers in the range 0 through 25; 0 means that the student didn’t take the test.

To find the average score in each section, we will use group.

The average score of Section 3 is 13.667, which does look low compared to the other section averages. But is it lower than the average of a section of the same size selected at random from the class?

Now we can figure out how to create one simulated value of our test statistic, the random sample average.

First we have to select 27 scores at random without replacement. Since the data are already in a table, we will use the Table method sample.

The average of these 27 randomly selected scores is

That’s the average of 27 randomly selected scores. The cell below collects the code necessary for generating this random average.

Now we can simulate the random sample average by repeating the calculation multple times.

Here is the histogram of the simulated averages. It shows the distribution of what the Section 3 average might have been, if Section 3 had been selected at random from the class.

The observed Section 3 average score of 13.667 is shown as a red dot on the horizontal axis. You can ignore the last line of code; it just draws the dot. 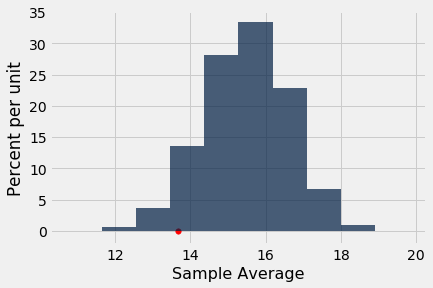 As we said earlier, small values of the test statistic will make us lean towards the alternative hypothesis, that the average score in the section is too low for it to look like a random sample from the class.

Is the observed statistic of 13.667 “too low” in relation to this distribution? In other words, is the red far enough out into the left hand tail of the histogram for you to think that it is “too far”?

Conventional Cut-offs and the P-value

If you don’t want to make your own judgment, there are conventions that you can follow. These conventions tell us how far out into the tails is considered “too far”.

The conventions are based on the area in the tail, starting at the observed statistic (the red dot) and looking in the direction that makes us lean toward the alternative (the left side, in this example). If the area of the tail is small, the observed statistic is far away from the values most commonly predicted by the null hypothesis.

Just about 5.7% of the simulated random sample averages were 3.667 or below. If we had drawn the students of Section 3 at random from the whole class, the chance that their average would be 13.667 or lower is about 5.7%.

This chance has an impressive name. It is called the observed significance level of the test. That’s a mouthful, and so it is commonly called the P-value of the test.

The P-value is the chance, based on the model in the null hypothesis, that the test statistic is equal to the value that was observed in the data or is even further in the direction of the alternative.

How small is “small”? According to the conventions:

By this convention, our P-value of 5.7% is not considered small. So we have to conclude that the GSI’s defense holds good – the average score of Section 3 is like those generated by random chance. Formally, the result of the test is not statistically significant.

When you make a conclusion in this way, we recommend that you don’t just say whether or not the result is statistically significant. Along with your conclusion, provide the observed statistic and the P-value as well, so that readers can use their own judgment.

Historical Note on the Conventions

The determination of statistical significance, as defined above, has become standard in statistical analyses in all fields of application. When a convention is so universally followed, it is interesting to examine how it arose.

The method of statistical testing – choosing between hypotheses based on data in random samples – was developed by Sir Ronald Fisher in the early 20th century. Sir Ronald might have set the convention for statistical significance somewhat unwittingly, in the following statement in his 1925 book Statistical Methods for Research Workers. About the 5% level, he wrote, “It is convenient to take this point as a limit in judging whether a deviation is to be considered significant or not.”

What was “convenient” for Sir Ronald became a cutoff that has acquired the status of a universal constant. No matter that Sir Ronald himself made the point that the value was his personal choice from among many: in an article in 1926, he wrote, “If one in twenty does not seem high enough odds, we may, if we prefer it draw the line at one in fifty (the 2 percent point), or one in a hundred (the 1 percent point). Personally, the author prefers to set a low standard of significance at the 5 percent point …”

Fisher knew that “low” is a matter of judgment and has no unique definition. We suggest that you follow his excellent example. Provide your data, make your judgment, and explain why you made it.