In modern data analytics, deciding whether two numerical samples come from the same underlying distribution is called A/B testing. The name refers to the labels of the two samples, A and B.

We will develop the method in the context of an example. The data come from a sample of newborns in a large hospital system. We will treat it as if it were a simple random sample though the sampling was done in multiple stages. Stat Labs by Deborah Nolan and Terry Speed has details about a larger dataset from which this set is drawn.

The table baby contains the following variables for 1,174 mother-baby pairs: the baby’s birth weight in ounces, the number of gestational days, the mother’s age in completed years, the mother’s height in inches, pregnancy weight in pounds, and whether or not the mother smoked during pregnancy.

One of the aims of the study was to see whether maternal smoking was associated with birth weight. Let’s see what we can say about the two variables.

We’ll start by selecting just Birth Weight and Maternal Smoker. There are 715 non-smokers among the women in the sample, and 459 smokers.

Let’s look at the distribution of the birth weights of the babies of the non-smoking mothers compared to those of the smoking mothers. To generate two overlaid histograms, we will use hist with the optional group argument which is a column label or index. The rows of the table are first grouped by this column and then a histogram is drawn for each one.

We can try to answer this question by a test of hypotheses. The chance model that we will test says that there is no underlying difference; the distributions in the samples are different just due to chance. Formally, this is the null hypothesis.

The alternative hypothesis compares the average birth weights of the two groups and says that the average for the mothers who smoke is smaller. Therefore it is reasonable for us to use the difference between the two group means as our statistic.

The observed value of the test statistic is about $-9.27$ ounces.

To see how the statistic should vary under the null hypothesis, we have to figure out how to simulate the statistic under that hypothesis. A clever method based on random permutations does just that.

If there were no difference between the two distributions in the underlying population, then whether a birth weight has the label True or False with respect to maternal smoking should make no difference to the average. The idea, then, is to shuffle all the birth weights randomly among the mothers. This is called random permutation.

Let’s see how to do this. It’s always a good idea to start with the data.

There are 1,174 rows in the table. To shuffle all the birthweights, we will draw a random sample of 1,174 rows without replacement. Then the sample will include all the rows of the table, in random order.

We can use the Table method sample with the optional with_replacement=False argument. We don’t have to specify a sample size, because by default, sample draws as many times as there are rows in the table.

Each mother now has a random birth weight assigned to her. If the null hypothesis is true, all these random arrangements should be equally likely.

Let’s see how different the average weights are in the two randomly selected groups.

But could a different shuffle have resulted in a larger difference between the group averages? To get a sense of the variability, we must simulate the difference many times.

Let’s collect all the code that we need for simulating one value of the difference between averages, under the null hypothesis. Notice that because we are using the same label each time for the column of shuffled weights, the existing column just gets overwritten by the newly generated one. This works well for us because we don’t need to save all the shuffled values. We just need to save the value of the statistic.

Tests based on random permutations of the data are called permutation tests. We are performing one in this example. In the cell below, we will simulate our test statistic – the difference between the averages of the two groups – many times and collect the differences in an array. The code in the body of the for loop is just copied over from the cell above. 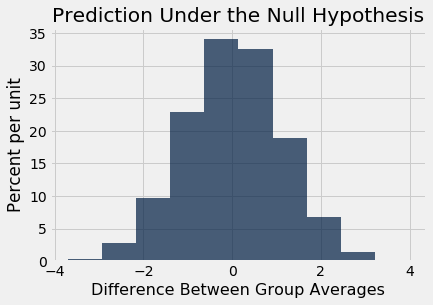 Notice how the distribution is centered around 0. This makes sense, because under the null hypothesis the two groups should have roughly the same average. Therefore the difference between the group averages should be around 0.

If you want to compute an empirical P-value, remember that low values of the statistic favor the alternative hypothesis.

The empirical P-value is 0, meaning that none of the 5,000 observed samples resulted in a difference of -9.27 or lower. This is an approximation; the exact chance of getting a difference in that range is not 0 but it is vanishingly small.

A Function to Simulate the Differences Under the Null Hypothesis

We will want to perform permutation tests for the difference between averages in other contexts as well. Let us define a function that generates the array of simulated differences, based on the code that we wrote above. That will save us time later.

It returns and array of simulated differences in group means, each computed by first randomly permuting the data and assigning random values to each group. The length of the array is equal to the number of repetitions.

As an example of the use of this function, we will test whether there was any difference in the ages of the smoking and non-smoking mothers. The histograms of the two distributions in the sample are a little different. The smokers seem a little younger on average.

The observed difference between the average ages is about $-0.8$ years.

If the underlying distributions of ages in the two groups are the same, then the empirical distribution of the difference based on permuted samples will predict how the statistic will vary due to chance.

We can generate such differences using the function we just defined.

The observed difference is in the tail of the empirical distribution of the differences simulated under the null hypothesis. 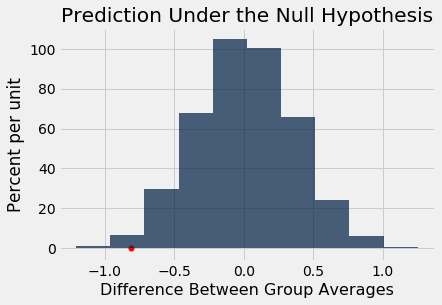 The empirical P-value of the test is the proportion of simulated differences that were equal to or less than the observed difference. This is because low values of the difference favor the alternative hypothesis that the smokers were younger on average.

The empirical P-value is just over 1%, which is less than 5% and therefore the result is statistically significant. The test supports the hypothesis that the smokers were younger on average.