The Adventures of Huckleberry Finn describes a journey that Huck and Jim take along the Mississippi River. Tom Sawyer joins them towards the end as the action heats up. Having loaded the text, we can quickly visualize how many times these characters have each been mentioned at any point in the book. 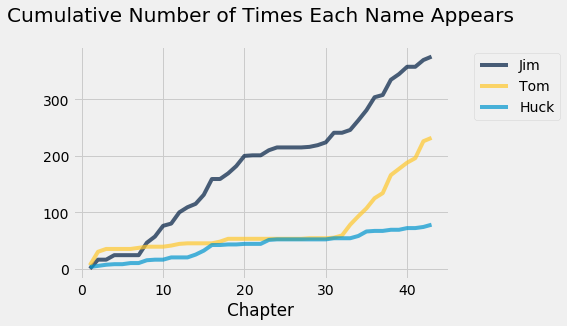 In the plot above, the horizontal axis shows chapter numbers and the vertical axis shows how many times each character has been mentioned up to and including that chapter.

You can see that Jim is a central character by the large number of times his name appears. Notice how Tom is hardly mentioned for much of the book until he arrives and joins Huck and Jim, after Chapter 30. His curve and Jim’s rise sharply at that point, as the action involving both of them intensifies. As for Huck, his name hardly appears at all, because he is the narrator.

Little Women is a story of four sisters growing up together during the civil war. In this book, chapter numbers are spelled out and chapter titles are written in all capital letters.

We can track the mentions of main characters to learn about the plot of this book as well. The protagonist Jo interacts with her sisters Meg, Beth, and Amy regularly, up until Chapter 27 when she moves to New York alone. 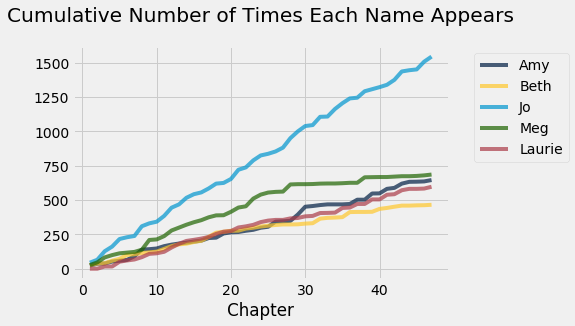 Laurie is a young man who marries one of the girls in the end. See if you can use the plots to guess which one.