We know that the mean is the balance point of the histogram. Unlike the mean, the SD is usually not easy to identify by looking at the histogram.

However, there is one shape of distribution for which the SD is almost as clearly identifiable as the mean. That is the bell-shaped disribution. This section examines that shape, as it appears frequently in probability histograms and also in some histograms of data.

A Roughly Bell-Shaped Histogram of Data 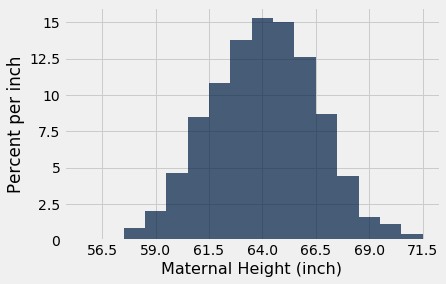 The last two lines of code in the cell above change the labeling of the horizontal axis. Now, the labels correspond to “average $\pm$ $z$ SDs” for $z = 0, \pm 1, \pm 2$, and $\pm 3$. Because of the shape of the distribution, the “center” has an unambiguous meaning and is clearly visible at 64.

How to Spot the SD on a Bell Shaped Curve

To see how the SD is related to the curve, start at the top of the curve and look towards the right. Notice that there is a place where the curve changes from looking like an “upside-down cup” to a “right-way-up cup”; formally, the curve has a point of inflection. That point is one SD above average. It is the point $z=1$, which is “average plus 1 SD” = 66.5 inches.

In general, for bell-shaped distributions, the SD is the distance between the mean and the points of inflection on either side.

All the bell-shaped histograms that we have seen look essentially the same apart from the labels on the axes. Indeed, there is really just one basic curve from which all of these curves can be drawn just by relabeling the axes appropriately.

To draw that basic curve, we will use the units into which we can convert every list: standard units. The resulting curve is therefore called the standard normal curve.

The standard normal curve has an impressive equation. But for now, it is best to think of it as a smoothed outline of a histogram of a variable that has been measured in standard units and has a bell-shaped distribution.

Here are some properties of the curve. Some are apparent by observation, and others require a considerable amount of mathematics to establish.

Since we are thinking of the curve as a smoothed histogram, we will want to represent proportions of the total amount of data by areas under the curve.

Areas under smooth curves are often found by calculus, using a method called integration. It is a fact of mathematics, however, that the standard normal curve cannot be integrated in any of the usual ways of calculus.

The fundamental function for finding areas under the normal curve is stats.norm.cdf. It takes a numerical argument and returns all the area under the curve to the left of that number. Formally, it is called the “cumulative distribution function” of the standard normal curve. That rather unwieldy mouthful is abbreviated as cdf.

Let us use this function to find the area to the left of $z=1$ under the standard normal curve.

The numerical value of the shaded area can be found by calling stats.norm.cdf.

That’s about 84%. We can now use the symmetry of the curve and the fact that the total area under the curve is 1 to find other areas.

The area between $z=-1$ and $z=1$ can be computed in several different ways. It is the gold area under the curve below.

In other words, if a histogram is roughly bell shaped, the proportion of data in the range “average $\pm$ 2 SDs” is about 95%.

That is quite a bit more than Chebychev’s lower bound of 75%. Chebychev’s bound is weaker because it has to work for all distributions. If we know that a distribution is normal, we have good approximations to the proportions, not just bounds.

The table below compares what we know about all distributions and about normal distributions. Notice that when $z=1$, Chebychev’s bound is correct but not illuminating.