A data scientist is using the data in a random sample to estimate an unknown parameter. She uses the sample to calculate the value of a statistic that she will use as her estimate.

It looks as though the data scientist is stuck.

Fortunately, a brilliant idea called the bootstrap can help her out. Since it is not feasible to generate new samples from the population, the bootstrap generates new random samples by a method called resampling: the new samples are drawn at random from the original sample.

Employee Compensation in the City of San Francisco

SF OpenData is a website where the City and County of San Francisco make some of their data publicly available. One of the data sets contains compensation data for employees of the City. These include medical professionals at City-run hospitals, police officers, fire fighters, transportation workers, elected officials, and all other employees of the City.

Compensation data for the calendar year 2015 are in the table sf2015.

There is one row for each of 42,979 employees. There are numerous columns containing information about City departmental affiliation and details of the different parts of the employee’s compensation package. Here is the row correspoding to the late Edward Lee, the Mayor at that time.

We are going to study the final column, Total Compensation. That’s the employee’s salary plus the City’s contribution towards his/her retirement and benefit plans.

Financial packages in a calendar year can sometimes be hard to understand as they depend on the date of hire, whether the employee is changing jobs within the City, and so on. For example, the lowest values in the Total Compensation column look a little strange.

For clarity of comparison, we will focus our attention on those who had at least the equivalent of a half-time job for the whole year. At a minimum wage of about \$10 per hour, and 20 hours per week for 52 weeks, that’s a salary of about \$10,000.

Let this table of just over 36,500 rows be our population. Here is a histogram of the total compensations. 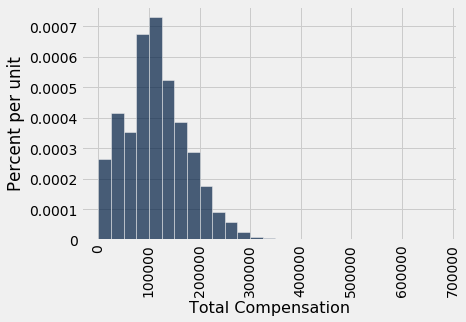 Now let the parameter be the median of the total compensations.

Since we have the luxury of having all of the data from the population, we can simply calculate the parameter:

The median total compensation of all employees was just over \$110,300.

From a practical perspective, there is no reason for us to draw a sample to estimate this parameter since we simply know its value. But in this section we are going to pretend we don’t know the value, and see how well we can estimate it based on a random sample.

In later sections, we will come down to earth and work in situations where the parameter is unknown. For now, we are all-knowing.

A Random Sample and an Estimate

Let us draw a sample of 500 employees at random without replacement, and let the median total compensation of the sampled employees serve as our estimate of the parameter. 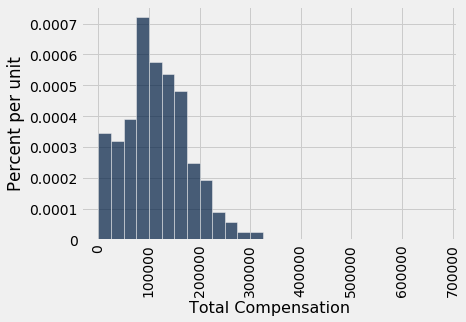 The sample size is large. By the law of averages, the distribution of the sample resembles that of the population, and consequently the sample median is not very far from the population median (though of course it is not exactly the same).

So now we have one estimate of the parameter. But had the sample come out differently, the estimate would have had a different value. We would like to be able to quantify the amount by which the estimate could vary across samples. That measure of variability will help us measure how accurately we can estimate the parameter.

To see how different the estimate would be if the sample had come out differently, we could just draw another sample from the population, but that would be cheating. We are trying to mimic real life, in which we won’t have all the population data at hand.

Somehow, we have to get another random sample without sampling from the population.

The Bootstrap: Resampling from the Sample

Here are the steps of the bootstrap method for generating another random sample that resembles the population:

It is important to resample the same number of times as the original sample size. The reason is that the variability of an estimate depends on the size of the sample. Since our original sample consisted of 500 employees, our sample median was based on 500 values. To see how different the sample could have been, we have to compare it to the median of other samples of size 500.

If we drew 500 times at random without replacement from our sample of size 500, we would just get the same sample back. By drawing with replacement, we create the possibility for the new samples to be different from the original, because some employees might be drawn more than once and others not at all.

Recall that when the sample method is used without specifying a sample size, by default the sample size equals the number of rows of the table from which the sample is drawn. That’s perfect for the bootstrap! Here is one new sample drawn from the original sample, and the corresponding sample median. 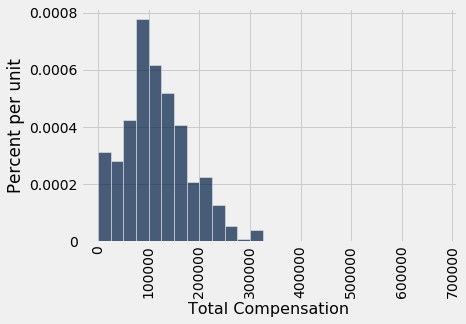 By resampling, we have another estimate of the population median. By resampling again and again, we will get many such estimates, and hence an empirical distribution of the estimates.

Let us define a function bootstrap_median that takes our original sample, the label of the column containing the variable, and the number of bootstrap samples we want to take, and returns an array of the corresponding resampled medians.

We now replicate the bootstrap process 5,000 times. The array bstrap_medians contains the medians of all 5,000 bootstrap samples. Notice that the code takes longer to run than our previous code. It has a lot of resampling to do!

Here is the histogram of the 5000 medians. The red dot is the population parameter: it is the median of the entire population, which we happen to know but did not use in the bootstrap process. 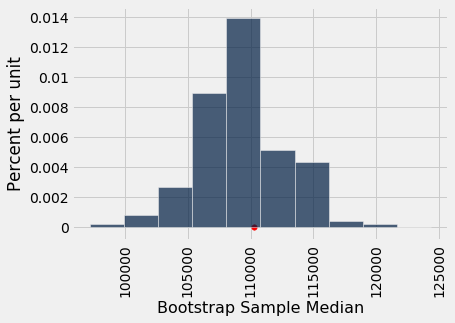 It is important to remember that the red dot is fixed: it is \$110,305.79, the population median. The empirical histogram is the result of random draws, and will be situated randomly relative to the red dot.

Remember also that the point of all these computations is to estimate the population median, which is the red dot. Our estimates are all the randomly generated sampled medians whose histogram you see above. We want those estimates to contain the parameter – it they don’t, then they are off.

Do the Estimates Capture the Parameter?

Here are the two ends of the “middle 95%” interval of resampled medians: 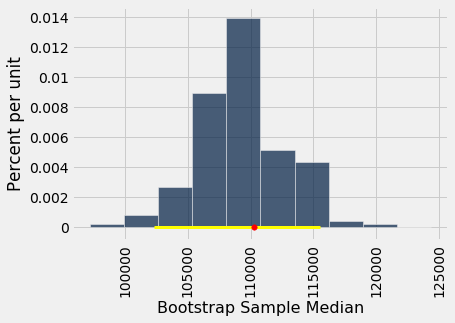 The “middle 95%” interval of estimates captured the parameter in our example. But was that a fluke?

To see how frequently the interval contains the parameter, we have to run the entire process over and over again. Specifically, we will repeat the following process 100 times:

We will end up with 100 intervals, and count how many of them contain the population median.

Spoiler alert: The statistical theory of the bootstrap says that the number should be around 95. It may be in the low 90s or high 90s, but not much farther off 95 than that.

For each of the 100 replications, we get one interval of estimates of the median.

It takes a few minutes to construct all the intervals, but try it again if you have the patience. Most likely, about 95 of the 100 intervals will be good ones: they will contain the parameter.

It’s hard to show you all the intervals on the horizontal axis as they have large overlaps – after all, they are all trying to estimate the same parameter. The graphic below shows each interval on the same axes by stacking them vertically. The vertical axis is simply the number of the replication from which the interval was generated.

The red line is where the parameter is. Good intervals cover the parameter; there are about 95 of these, typically.

If an interval doesn’t cover the parameter, it’s a dud. The duds are the ones where you can see “daylight” around the red line. There are very few of them – about 5, typically – but they do happen.

Any method based on sampling has the possibility of being off. The beauty of methods based on random sampling is that we can quantify how often they are likely to be off.

To summarize what the simulation shows, suppose you are estimating the population median by the following process:

That gives you one interval of estimates. Now if you repeat the entire process 100 times, ending up with 100 intervals, then about 95 of those 100 intervals will contain the population parameter.

In other words, this process of estimation captures the parameter about 95% of the time.