Math is the main tool for finding probabilities exactly, though computers are useful for this purpose too. Simulation can provide excellent approximations, with high probability. In this section, we will informally develop a few simple rules that govern the calculation of probabilities. In subsequent sections we will return to simulations to approximate probabilities of complex events.

We will use the standard notation $P(\mbox{event})$ to denote the probability that “event” happens, and we will use the words “chance” and “probability” interchangeably.

When an Event Doesn’t Happen

When All Outcomes are Equally Likely

If you are rolling an ordinary die, a natural assumption is that all six faces are equally likely. Then probabilities of how one roll comes out can be easily calculated as a ratio. For example, the chance that the die shows an even number is Similarly,

provided all the outcomes are equally likely.

Not all random phenomena are as simple as one roll of a die. The two main rules of probability, developed below, allow mathematicians to find probabilities even in complex situations.

When Two Events Must Both Happen

Suppose you have a box that contains three tickets: one red, one blue, and one green. Suppose you draw two tickets at random without replacement; that is, you shuffle the three tickets, draw one, shuffle the remaining two, and draw another from those two. What is the chance you get the green ticket first, followed by the red one?

There are six possible pairs of colors: RB, BR, RG, GR, BG, GB (we’ve abbreviated the names of each color to just its first letter). All of these are equally likely by the sampling scheme, and only one of them (GR) makes the event happen. So

But there is another way of arriving at the answer, by thinking about the event in two stages. First, the green ticket has to be drawn. That has chance $1/3$, which means that the green ticket is drawn first in about $1/3$ of all repetitions of the experiment. But that doesn’t complete the event. Among the 1/3 of repetitions when green is drawn first, the red ticket has to be drawn next. That happens in about $1/2$ of those repetitions, and so: This calculation is usually written “in chronological order,” as follows.

The factor of $1/2$ is called “ the conditional chance that the red ticket appears second, given that the green ticket appeared first.”

In general, we have the multiplication rule:

Thus, when there are two conditions – one event must happen, as well as another – the chance is a fraction of a fraction, which is smaller than either of the two component fractions. The more conditions that have to be satisfied, the less likely they are to all be satisfied.

When an Event Can Happen in Two Different Ways

Suppose instead we want the chance that one of the two tickets is green and the other red. This event doesn’t specify the order in which the colors must appear. So they can appear in either order.

A good way to tackle problems like this is to partition the event so that it can happen in exactly one of several different ways. The natural partition of “one green and one red” is: GR, RG.

Each of GR and RG has chance $1/6$ by the calculation above. So you can calculate the chance of “one green and one red” by adding them up.

In general, we have the addition rule:

provided the event happens in exactly one of the two ways.

Thus, when an event can happen in one of two different ways, the chance that it happens is a sum of chances, and hence bigger than the chance of either of the individual ways.

We end the section with examples that use combinations of all these rules.

At Least One Success

Data scientists often work with random samples from populations. A question that sometimes arises is about the likelihood that a particular individual in the population is selected to be in the sample. To work out the chance, that individual is called a “success,” and the problem is to find the chance that the sample contains a success.

To see how such chances might be calculated, we start with a simpler setting: tossing a coin two times.

If you toss a coin twice, there are four equally likely outcomes: HH, HT, TH, and TT. We have abbreviated “Heads” to H and “Tails” to T. The chance of getting at least one head in two tosses is therefore 3/4.

Another way of coming up with this answer is to work out what happens if you don’t get at least one head: both the tosses have to land tails. So

Notice also that by the multiplication rule.

These two observations allow us to find the chance of at least one head in any given number of tosses. For example,

And now we are in a position to find the chance that the face with six spots comes up at least once in rolls of a die.

The table below shows these probabilities as the number of rolls increases from 1 to 50.

The chance that a 6 appears at least once rises rapidly as the number of rolls increases. 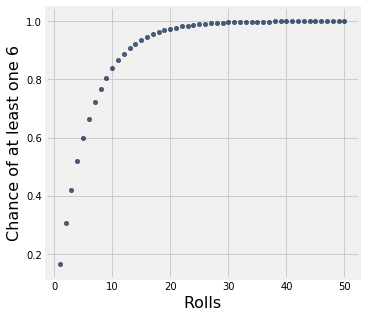 In 50 rolls, you are almost certain to get at least one 6.