Tables are a powerful way of organizing and visualizing data. However, large tables of numbers can be difficult to interpret, no matter how organized they are. Sometimes it is much easier to interpret graphs than numbers.

In this chapter we will develop some of the fundamental graphical methods of data analysis. Our source of data is the Internet Movie Database, an online database that contains information about movies, television shows, video games, and so on. The site Box Office Mojo provides many summaries of IMDB data, some of which we have adapted. We have also used data summaries from The Numbers, a site with a tagline that says it is “where data and the movie business meet.”

The table actors contains data on Hollywood actors, both male and female. The columns are:

In the calculation of the gross receipt, the data tabulators did not include movies where an actor had a cameo role or a speaking role that did not involve much screen time.

The table has 50 rows, corresponding to the 50 top grossing actors. The table is already sorted by Total Gross, so it is easy to see that Harrison Ford is the highest grossing actor. In total, his movies have brought in more money at domestic box office than the movies of any other actor.

Terminology. A variable is a formal name for what we have been calling a “feature”, such as ‘number of movies.’ The term variable emphasizes that the feature can have different values for different individuals – the numbers of movies that actors have been in varies across all the actors.

Variables that have numerical values, such as ‘number of movies’ or ‘average gross receipts per movie’ are called quantitative or numerical variables.

A scatter plot displays the relation between two numerical variables. You saw an example of a scatter plot in an early section where we looked at the number of periods and number of characters in two classic novels. 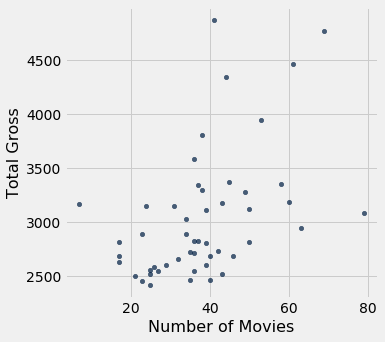 The plot contains 50 points, one point for each actor in the table. You can see that it slopes upwards, in general. The more movies an actor has been in, the more the total gross of all of those movies – in general.

Later in the course we will study how to quantify association. For the moment, we will just think about it qualitatively. 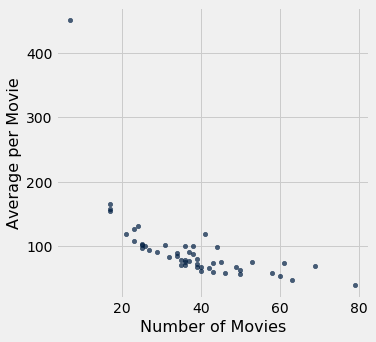 This is a markedly different picture and shows a negative association. In general, the more movies an actor has been in, the less the average receipt per movie.

Also, one of the points is quite high and off to the left of the plot. It corresponds to one actor who has a low number of movies and high average per movie. This point is an outlier. It lies outside the general range of the data. Indeed, it is quite far from all the other points in the plot.

We will examine the negative association further by looking at points at the right and left ends of the plot.

For the right end, let’s zoom in on the main body of the plot by just looking at the portion that doesn’t have the outlier. 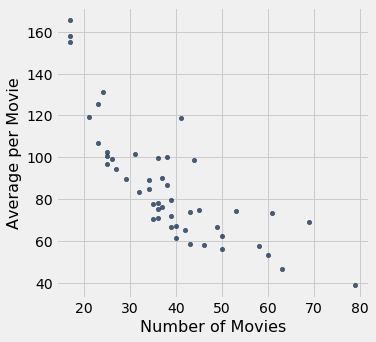 The negative association is still clearly visible. Let’s identify the actors corresponding to the points that lie on the right hand side of the plot where the number of movies is large:

The great actor Robert DeNiro has the highest number of movies and the lowest average receipt per movie. Other fine actors are at points that are not very far away, but DeNiro’s is at the extreme end.

To understand the negative association, note that the more movies an actor is in, the more variable those movies might be, in terms of style, genre, and box office draw. For example, an actor might be in some high-grossing action movies or comedies (such as Meet the Fockers), and also in a large number of smaller films that may be excellent but don’t draw large crowds. Thus the actor’s value of average receipts per movie might be relatively low.

To approach this argument from a different direction, let us now take a look at the outlier.

As an actor, Anthony Daniels might not have the stature of Robert DeNiro. But his 7 movies had an astonishingly high average receipt of nearly $452$ million dollars per movie.

What were these movies? You might know about the droid C-3PO in Star Wars: 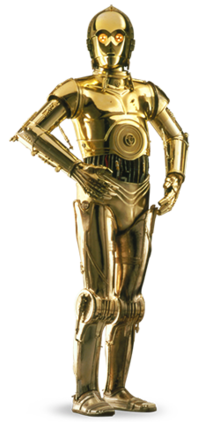 That’s Anthony Daniels inside the metallic suit. He plays C-3PO.

Mr. Daniels’ entire filmography (apart from cameos) consists of movies in the high-grossing Star Wars franchise. That explains both his high average receipt and his low number of movies.

Line graphs are among the most common visualizations and are often used to study chronological trends and patterns.

The table movies_by_year contains data on movies produced by U.S. studios in each of the years 1980 through 2015. The columns are: 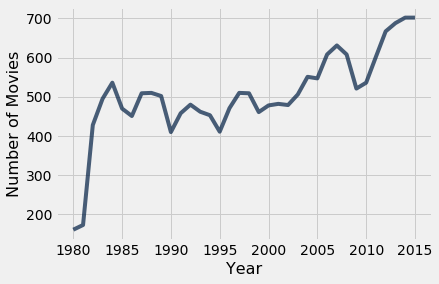 The graph rises sharply and then has a gentle upwards trend though the numbers vary noticeably from year to year. The sharp rise in the early 1980’s is due in part to studios returning to the forefront of movie production after some years of filmmaker driven movies in the 1970’s.

Our focus will be on more recent years. In keeping with the theme of movies, the table of rows corresponding to the years 2000 through 2015 have been assigned to the name century_21. 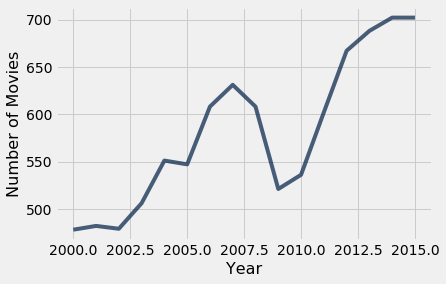 The global financial crisis of 2008 has a visible effect – in 2009 there is a sharp drop in the number of movies released.

The dollar figures, however, didn’t suffer much. 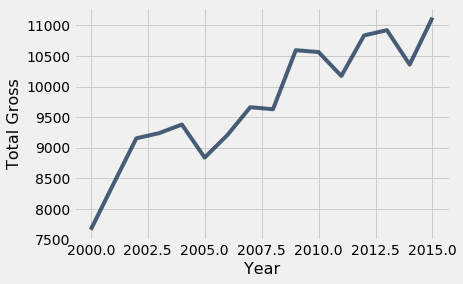 The total domestic gross receipt was higher in 2009 than in 2008, even though there was a financial crisis and a much smaller number of movies were released.

One reason for this apparent contradiction is that people tend to go to the movies when there is a recession. “In Downturn, Americans Flock to the Movies,” said the New York Times in February 2009. The article quotes Martin Kaplan of the University of Southern California saying, “People want to forget their troubles, and they want to be with other people.” When holidays and expensive treats are unaffordable, movies provide welcome entertainment and relief.

In 2009, another reason for high box office receipts was the movie Avatar and its 3D release. Not only was Avatar the #1 movie of 2009, it is also by some calculations the second highest grossing movie of all time, as we will see later.