One of the earliest examples of astute observation eventually leading to the establishment of causality dates back more than 150 years. To get your mind into the right timeframe, try to imagine London in the 1850’s. It was the world’s wealthiest city but many of its people were desperately poor. Charles Dickens, then at the height of his fame, was writing about their plight. Disease was rife in the poorer parts of the city, and cholera was among the most feared. It was not yet known that germs cause disease; the leading theory was that “miasmas” were the main culprit. Miasmas manifested themselves as bad smells, and were thought to be invisible poisonous particles arising out of decaying matter. Parts of London did smell very bad, especially in hot weather. To protect themselves against infection, those who could afford to held sweet-smelling things to their noses.

For several years, a doctor by the name of John Snow had been following the devastating waves of cholera that hit England from time to time. The disease arrived suddenly and was almost immediately deadly: people died within a day or two of contracting it, hundreds could die in a week, and the total death toll in a single wave could reach tens of thousands. Snow was skeptical of the miasma theory. He had noticed that while entire households were wiped out by cholera, the people in neighboring houses sometimes remained completely unaffected. As they were breathing the same air—and miasmas—as their neighbors, there was no compelling association between bad smells and the incidence of cholera.

Snow had also noticed that the onset of the disease almost always involved vomiting and diarrhea. He therefore believed that that infection was carried by something people ate or drank, not by the air that they breathed. His prime suspect was water contaminated by sewage.

At the end of August 1854, cholera struck in the overcrowded Soho district of London. As the deaths mounted, Snow recorded them diligently, using a method that went on to become standard in the study of how diseases spread: he drew a map. On a street map of the district, he recorded the location of each death.

Here is Snow’s original map. Each black bar represents one death. The black discs mark the locations of water pumps. The map displays a striking revelation–the deaths are roughly clustered around the Broad Street pump. 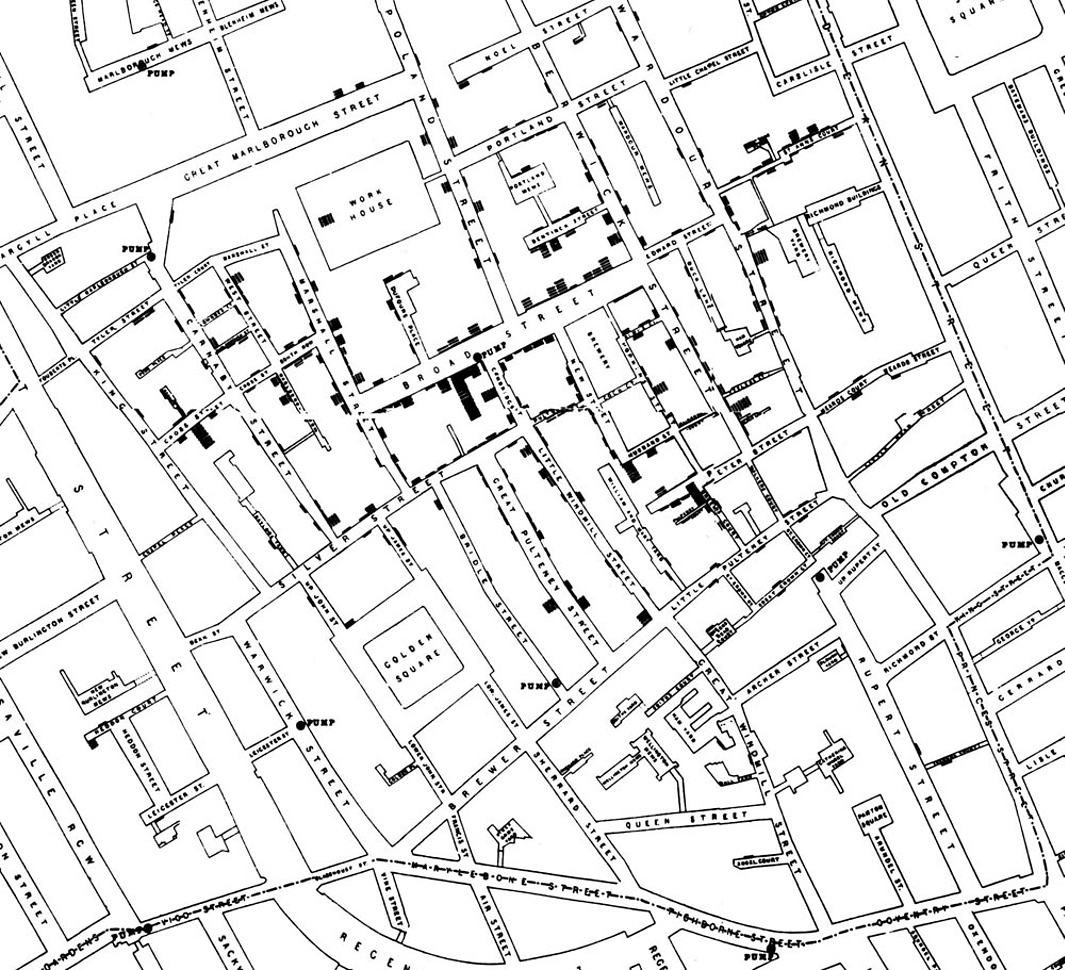 Snow studied his map carefully and investigated the apparent anomalies. All of them implicated the Broad Street pump. For example:

The final piece of evidence in support of Snow’s theory was provided by two isolated deaths in the leafy and genteel Hampstead area, quite far from Soho. Snow was puzzled by these until he learned that the deceased were Mrs. Susannah Eley, who had once lived in Broad Street, and her niece. Mrs. Eley had water from the Broad Street pump delivered to her in Hampstead every day. She liked its taste.

Later it was discovered that a cesspit that was just a few feet away from the well of the Broad Street pump had been leaking into the well. Thus the pump’s water was contaminated by sewage from the houses of cholera victims.

Snow used his map to convince local authorities to remove the handle of the Broad Street pump. Though the cholera epidemic was already on the wane when he did so, it is possible that the disabling of the pump prevented many deaths from future waves of the disease.

The removal of the Broad Street pump handle has become the stuff of legend. At the Centers for Disease Control (CDC) in Atlanta, when scientists look for simple answers to questions about epidemics, they sometimes ask each other, “Where is the handle to this pump?”

Snow’s map is one of the earliest and most powerful uses of data visualization. Disease maps of various kinds are now a standard tool for tracking epidemics.

Though the map gave Snow a strong indication that the cleanliness of the water supply was the key to controlling cholera, he was still a long way from a convincing scientific argument that contaminated water was causing the spread of the disease. To make a more compelling case, he had to use the method of comparison.

If the results are different, that is evidence for an association. To determine causation, however, even more care is needed.